We never give up.

We greet challenge with courage.

We ask questions and seek answers.

We use a range of strategies to move forward when we are stuck.

We use our imagination and find new ways to do things.

We work carefully and diligently towards our goals.

We make connections with other skills and knowledge that we have.

A New PE curriculum is being prepared and will be on this page soon.

The County X-Country Finals at Prestwold Hall was a challenge for all of our runners.

The rain early morning and all week had turned the course into a sea of mud. The miserable conditions did not stop our athletes from showing determination despite the conditions.

Marriott has been involved in various football competitions this year.

The Y5/6 Boys have been in the Football League, The Danone Cup and The FA Cup.

The girls have been in the Girls Football League.

We have also been involved in Inclusive Football and Y3/4 Boys and Girls Competition at Goals.

They showed perseverance, team work, respect for the officials and good sportsmanship which resulted in them winning The Spirit of the Games.

The gymnasts performed their routines to their parents the week after the competition.

A fabulous dance performance form our Dance group based on the Olympics and Paralympics.

Marriott had lots of success at the Inclusive Sportshall Athletics.

As a team we came 2nd across the city.

Farhan was also 3rd in the Individual Boys Competition.

Farhan, Cohen & Mikhail also achieved the UKA Bronze Award Badge for Disability Sportshall Athletics - all 3 athletes were selected for the All Stars Team for the Level 3 County Finals.

The second X-Country Competition of the year was a lovely bright afternoon where our athletes gave good performances. The top 20 finishers were:

Marriott played in several rounds of the Basketball League. They won the Shield Competition.

Marriott won our division of the Table Tennis League. Arihanna was awarded Top Girl Player and Alitaha was awarded Top Boy Player.
The netball teams have had several events this year. They had a coaching session led by Val Kindred who is the Leicestershire Development Officer, followed by some matches. They had matches against Mayflower in preparation for the league starting. We played the first session of the league winning all of our matches and being top of of the table. The final session of the league was cancelled due to Covid19.
Sportshall Athletics - another successful year for Marriott at the West Area Sportshall Athletics Competition. The team came 3rd out of 24 schools. There were some outstanding individual performances as well as a strong Team performance.

The teams have to run 5000m as fast as they can, they run 100m before passing the baton to the next runner and continue until all 500om is completed.

This year Marriott Wildcats were selected to walk around the pitch at Wembley before the Womens FA Cup Final.

The girls (and staff) were very excited to be going to such an iconic venue for a Cup Final.

When we arrived we had some time to get lots of photos outside the stadium before entering.

We were very excited about how good our seats were and all the lovely Wildcats goodies that where for each Wildcat.

The Wildcats lined up in the tunnel before the parade with all the other participating clubs.

The Wildcats looked very smart in their kit and waving the banners we had taken with us.

They walked around the pitch, waving to the crowd and enjoying the atmosphere in the stadium.

National Anthem played, everyone stood respectfully for this (although no singing).

The Match – a brilliant fast game of end to end football which saw Manchester City Crowned Champions at the end.

This was a great day out, everyone had a fabulous time. 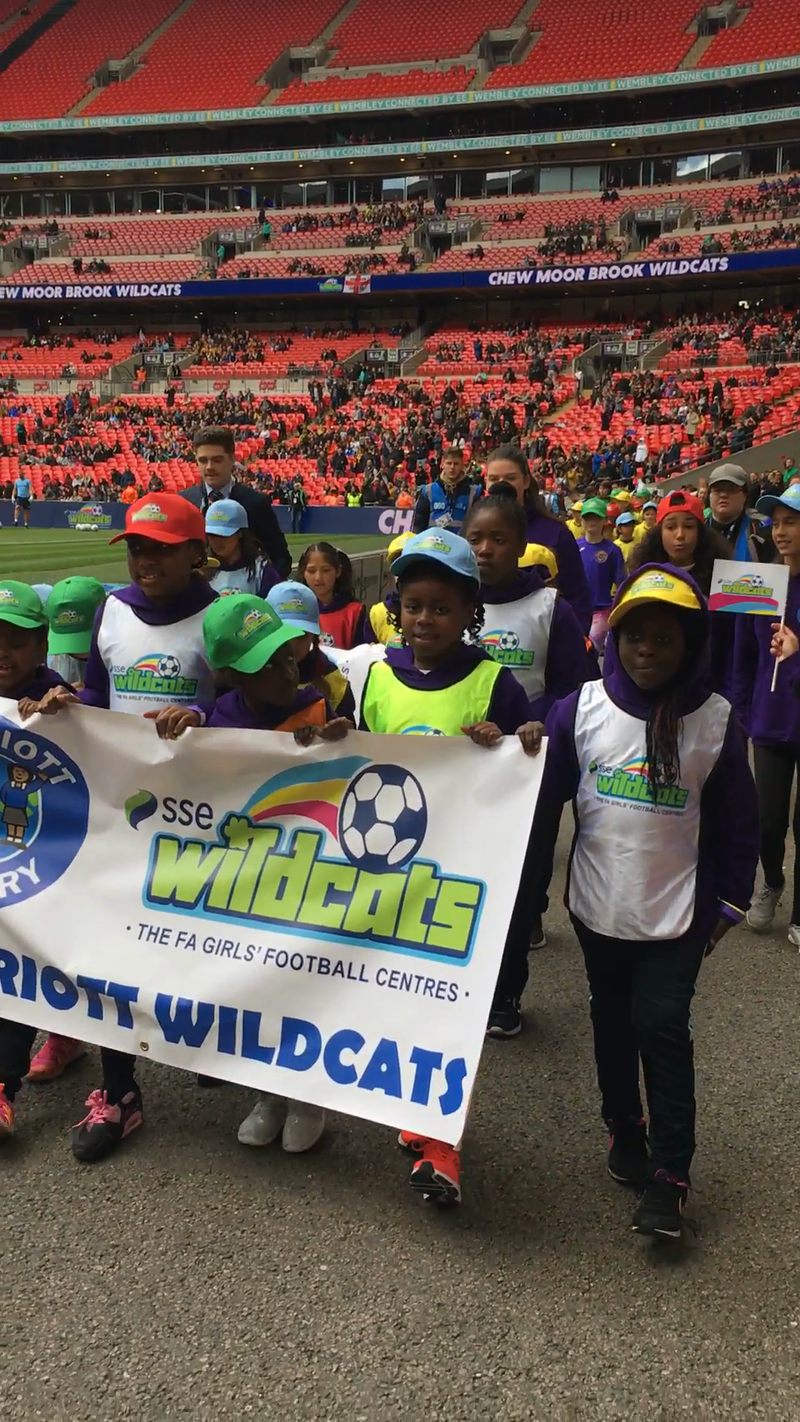 The Y3S competed in a Tag Rugby Competition being run by Leicester Tigers.

This was a culmination of Leicester Tigers Coaching in school.

We took 5 of our 7 X-Country Qualifiers TO THE National and County X-Country Finals at Prestwold Hall.

Out students put in great performances over very rough terrain.

Congratulations to Edzus who was part of the Y6 Boys Winning County Team.

Marriott had 8 teams competing in the X-Country Competition in MARCH.

This event was also the qualifier for the County & National X-Country Finals. Runners had to come in the top 24 to be selected, with over 100 runners in each race, this is quite an achievement.

Congratulations to Ahlam who was 3rd In the Y6 Girls Race.

7 Runners from Marriott qualified for the County & National X-Country Finals.

We took 6 teams to this years gymnastics competition. Congratulations to our Inclusive Team which was 3rd and Holly Walker who was 4th in the Individual Competition.

Marriott took a team to the New Age Kurling Competition.

The team put in some great shots, hitting the target n many occasions.

The dance group competed in the Dance Competition.

The theme of this year's competition was the Rugby World Cup and each school had to choose a country to represent. Marriott chose to represent Fiji.

Congratulations to Freya who was awarded Star Performer of the competition.

We took a group of students to a Health Festival for Y3&4.

They participated in a variety of activities including, smoothie bike, skipping, boxercise and parachute games.

They had a great time really getting involved in all of the different activities.

The basketball team are having a successful season this year. Basketball League – Runners Up SSPAN West Basketball – Spirit of the Games Winners and Runners Up in the Competition. Aja was the Star Performer.

Marriott had 4 teams competing in the 5k World Challenge. Each team had to run 5k with each athlete running 100m at a time as part of the relay. The Year 6 Team were 3rd.

X-Country 12th October 2018 We had a great start to the first X-Country competition of the year. 8 Teams competed, with a boys and girls team from Years 3,4,5&6. Congratulations to Aja who was 1st in the Y6 Girls Race. Naledi 8th Y4 Girls Race. Maria 16th Y5 Girls Race. Ahlam 17th Y6 Girls Race.

Sportshall Ahletics 9th November 2018 Marriott Y5/6 Sportshall Athletics Team continued their success from last year by winning the West Sportshall Athletics Competition, beating 23 other teams in a very competitive event. This means they have qualified for the Level 3 County Finals in January, where they will compete against the winners from all of the other areas in Leicestershire.

Level 3 County Sportshall Athletics Marriott qualified for this competition in November and are representing West Leicester at Uppingham College Sports Centre. Our athletes put in amazing performances and finished 3rd in the County.